This is only for reference.  The level achieved for this kind of essay would be in the range of 2 to 3.

Ways in which one can model the relationship between car crashes and the age of the driver, using linear regression, verifying with the normal distribution.

I have decided to center this mathematical exploration around the topic of age and car accidents. For this assessment, I will be finding the relationship between age, gender, and car crashes in the UK. Basically, how is age affecting the possibility of having an accident? As a car enthusiast myself, I realized while I was doing my driver’s license and I went to the highway for the first time, it is going really fast and I can get into a car accident really easily. Since I am very interested in cars and I know how fast they can go I know that they can also be very dangerous if you go too fast when you are inexperienced. I want to investigate the relationship between the different age groups and car accidents are. I am very interested in it because I love cars and it can be a warning for younger and older people to drive safer and more responsibly.

Road traffic collisions are a major global concern. They account for more than 1.2 million deaths worldwide each year and an even larger number of serious injuries (World Health Organization,

2015). Obtaining a better understanding of the factors that contribute to driver crash risk is critical for the development of effective road safety policies and initiatives. The car accident in the Member States of the European Union claims about 25.600 lives and leave more than 1,4 million people injured in 2016 (IRTAD Annual Road Safety Report). Many measures have been taken to reduce traffic accidents. After a pilot phase of about 3 years, the Council endorsed the “Report from the Commission on the progress with the project and its future prospects” (European Commission).

Statement of Task The objective of this investigation is to determine how age is affecting the chance of causing a car accident, in order to find out what age it is more likely to cause an accident. The type of data will be collected from the website “National safety”. The data of these statistics will be used to determine what age is more likely to cause an accident and verify with Normal Probability Distribution.

I investigate and model the relationship between age, gender and car crashes. I will use a correlation and regression equation. Furthermore, I use the mean and standard deviation to compare with a normal distribution.

The youngest and oldest drivers were the fewest in number in the population. Specifically, drivers aged 17–20 years were 87% fewer in number, and drivers aged 70 years and above were 46% fewer in number than drivers aged 40–49 years who were representing the largest driver age group in the population (National Safety Council). For both genders, fewer trips were made at night than during the daytime or evening. Only 8% of trips were taken by men and 5% of trips were taken by women which were during the night (National Safety Council).

Table 1: This table shows how the different age groups, gender groups, and daytime who were included in the car crashes in the year 2016. [14,959 drivers on average] 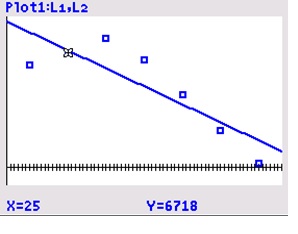 On the x-axis the age and on the y-axis total number of car crashes taken. [TI Smartview 84Plus family]

And the correlation coefficient is -0.85 which reveals that there is a strong negative relation between drivers’ age and car crashes. As the drivers’ age is increasing the number of car crashes is decreasing. The car crash rates involvement by driver age and gender were calculated based on the estimated number of licensed drivers. However, the youngest age group had a high relative risk of being involved in a fatal and non-fatal accident compared to the 61- to 70-year-old group.

The percentage of crashes in a year, therefore

The risk of car crash for the age group of 25 years drivers is more than other age groups.

On the x-axis the age and on the y-axis total number of car crashes taken.[TI Smartview 84Plus ]

The percentage of crashes in a year, therefore

The risk of car crash for the age group of 25 years drivers is more than other age groups.

On the x-axis the age and on the y-axis total number of car crashes taken.[TI Smartview 84Plus ]

Analysis: The male and female car crash regressions graphs comparison above clearly indicate that the rate of male car crashes is decreasing faster than female car crashes. The number of car accidents decreased slowly with age at 70+. Men and women showed similar trends but with lower frequency for women. The risk of car crashes for teens was higher than that of drivers aged 70-79. Clearly, there is more risk of crashing in males between the age limit 30-39 and in females 21-30.

The rates of car accident rates are usually used to find out the risk of different groups of drivers. Here I was applying a crash risk method, for which the number of crashes is corresponding in size to the amount of driving exposure. I also found from the comparison graph of male and female car crashes that normal distribution crash rates were reduced steeply from age 17–20 years through age 71-80 years. Older drivers had reduced crash involvement and death risks when using the crash risk. Finally, nighttime driving among teen drivers accounted for a smaller proportion of their crash risk than implied by crash rates. Young males are reported to have higher crash rates at night compared to daytime. In both male and female drives of the age group of 31-40 have a high chance of a car crash.

Road accidents are a big global problem. A wealth of research into road safety has evaluated driver characteristics such as age and gender, which are associated with an increased risk of accidents.

I also found out about the nonfatal crash risks among different groups. In addition to crash involvement, driver’s age and gender have also been shown to affect the severity of crash outcomes. This research applied a new approach to model crash risks based on data that bears a linear relation with crashes. This work has important practical implications for improving road safety initiatives. This is an important comparison for identifying the risk of driving conditions.