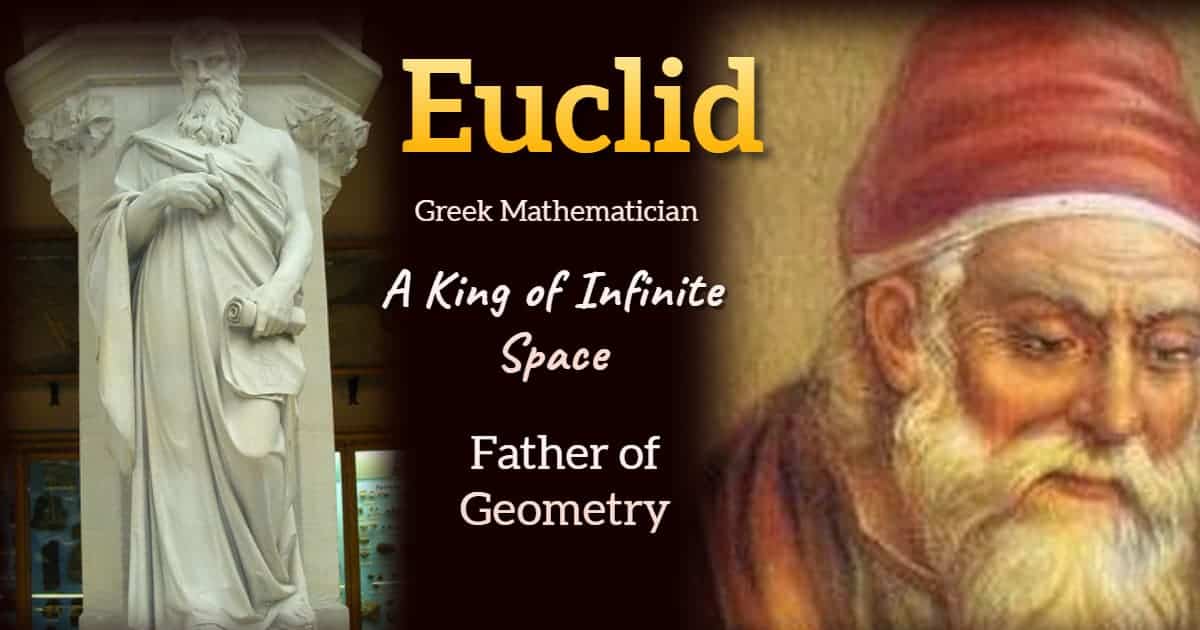 Euclid of Alexandria (lived c. 300 BCE) systematized ancient Greek and Near Eastern mathematics and geometry. He wrote The Elements, the most widely used mathematics and geometry textbook in history. Older books sometimes confuse him with Euclid of Megara. Modern economics has been called “a series of footnotes to Adam Smith,” who was the author of The Wealth of Nations (1776 CE). Likewise, much of Western mathematics has been a series of footnotes to Euclid, either developing his ideas or challenging them.

Almost nothing is known of Euclid’s life. Around 300 BCE, he ran his own school in Alexandria, Egypt. We do not know the years or places of his birth and death. He seems to have written a dozen or so books, most of which are now lost.

The philosopher Proclus of Athens (412-485 CE), who lived seven centuries later, said that Euclid “put together the Elements, collecting many of Eudoxus’s theorems, perfecting many of Theaetetus’s, and bringing to irrefragable demonstration things which were only somewhat loosely proved by his predecessors.” The scholar Stobaeus lived at about the same time as Proclus. He collected Greek manuscripts that were in danger of being lost. He told a story about Euclid that has the ring of truth:

Someone who had begun to [study] geometry asked Euclid, ‘What shall I get by learning these things?’ Euclid called his slave and said, ‘Give him [some money], since he must make gain out of what he learns’.

In The Elements, Euclid collected, organized, and proved geometric ideas that were already used as applied techniques. Except for Euclid and some of his Greek predecessors such as Thales (624-548 BCE), Hippocrates (470-410 BCE), Theaetetus (417-369 BCE), and Eudoxus (408-355 BCE), hardly anyone had tried to figure out why the ideas were true or if they applied in general. Thales even became a celebrity in Egypt because he could see the mathematical principles behind rules for specific problems, then apply the principles to other problems such as determining the height of the pyramids.

The ancient Egyptians knew a lot of geometry, but only as applied methods based on testing and experience. For example, to calculate the area of a circle, they made a square whose sides were eight-ninths the length of the circle’s diameter. The area of the square was close enough to the area of the circle that they could not detect any difference. Their method implies that pi has a value of 3.16, slightly off its true value of 3.14… but close enough for simple engineering. Most of what we know about ancient Egyptian mathematics comes from the Rhind Papyrus, discovered in the mid-19th century CE and now kept in the British Museum.

Although Euclid is a famous mathematician, very little is known about his life. It is believed that he was a student of Plato. Euclid was born around 365 B.C. in Alexandria, Egypt and lived until about 300 B.C. Euclid’s most famous work is his collection of 13 books, dealing with geometry, called The Elements. They are said to be ” the most studied books apart from the Bible”.

This set of books is remarkably clear and easy to understand. Theorems are stated, then they are proved.

Euclid actually made few discoveries. He did make a few, but very minute ones. His books, the Elements, are based on the works of people before him. Interesting huh??? However, most of the proofs he made on his own.

Euclidean geometry is the study of points, lines, planes, and other geometric figures. The most prolonged argument over time has been that of the parallel postulate which states: there can only be one line that contains a given point and is parallel to another line.

I have noticed that in many high schools today, very little geometry is taught, if any at all. This disturbs me because math teaches logic. Geometry is like a big puzzle. You find the pieces, and put them where they go. Geometry also teaches understanding. How do you know if something is true or right? You don’t until you prove it. Not only do you need logic for geometry class, you also need to be logic to survive in the world. If it is not being taught in the schools anymore, where will people obtain it?