In mathematics, a Voronoi diagram is a partition of a plane into regions close to each of a given set of objects. In the simplest case, these objects are just finitely many points in the plane (called seeds, sites, or generators). … Voronoi cells are also known as Thiessen polygons.

The partitioning of a plane with

points into convex polygons such that each polygon contains exactly one generating point and every point in a given polygon is closer to its generating point than to any other. A Voronoi diagram is sometimes also known as a Dirichlet tessellation. The cells are called Dirichlet regions, Thiessen polytopes, or Voronoi polygons. 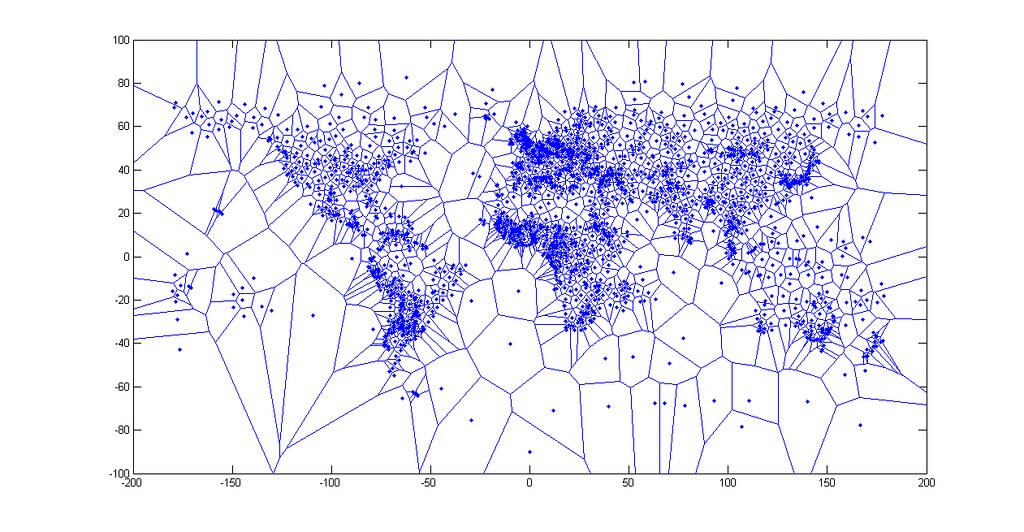 Voronoi diagrams were considered as early at 1644 by René Descartes and were used by Dirichlet (1850) in the investigation of positive quadratic forms. They were also studied by Voronoi (1907), who extended the investigation of Voronoi diagrams to higher dimensions. They find widespread applications in areas such as computer graphics, epidemiology, geophysics, and meteorology. A particularly notable use of a Voronoi diagram was the analysis of the 1854 cholera epidemic in London, in which physician John Snow determined a strong correlation of deaths with proximity to a particular (and infected) water pump on Broad Street (Snow 1854, Snow 1855). In his analysis, Snow constructed a map on which he drew a line labeled “Boundary of equal distance between Broad Street Pump and other Pumps.” This line essentially indicated the Broad Street Pump’s Voronoi cell (Austin 2006). However, for an analysis highlighting some of the oversimplifications and misattributions in this folklore history account of the events surrounding Snow and the London cholera incident, see Field (2020).

Euclid (c. 300 BC) Geometry and Supercars

We use cookies on our website to give you the most relevant experience by remembering your preferences and repeat visits. By clicking “Accept All”, you consent to the use of ALL the cookies. However, you may visit "Cookie Settings" to provide a controlled consent.
Cookie SettingsAccept All
Manage consent

This website uses cookies to improve your experience while you navigate through the website. Out of these, the cookies that are categorized as necessary are stored on your browser as they are essential for the working of basic functionalities of the website. We also use third-party cookies that help us analyze and understand how you use this website. These cookies will be stored in your browser only with your consent. You also have the option to opt-out of these cookies. But opting out of some of these cookies may affect your browsing experience.
Necessary Always Enabled
Necessary cookies are absolutely essential for the website to function properly. These cookies ensure basic functionalities and security features of the website, anonymously.
Functional
Functional cookies help to perform certain functionalities like sharing the content of the website on social media platforms, collect feedbacks, and other third-party features.
Performance
Performance cookies are used to understand and analyze the key performance indexes of the website which helps in delivering a better user experience for the visitors.
Analytics
Analytical cookies are used to understand how visitors interact with the website. These cookies help provide information on metrics the number of visitors, bounce rate, traffic source, etc.
Advertisement
Advertisement cookies are used to provide visitors with relevant ads and marketing campaigns. These cookies track visitors across websites and collect information to provide customized ads.
Others
Other uncategorized cookies are those that are being analyzed and have not been classified into a category as yet.
SAVE & ACCEPT